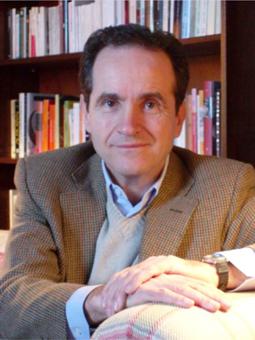 Carles Casajuana (Sant Cugat del Vallès, 1954) is a writer and a diplomat.

He made his literary debut in 1987 with the novel Tap d'escopeta (Popgun Cork). Since then he has published another eleven novels exploring the hopes, wishes and failures of the generation of people aged twenty when Franco died, satirising the literary world, and describing tensions in distant countries in which he has lived. The borders between novel and essay, and the Catalan language and identity also feature prominently in his latests novels. Critics draw attention to his incisive style, his irony, the component of moral reflection in his work, and his skill at sustaining narrative tension.

In 2009 he was awarded the Ramon Llull Prize for his novel L'últim home que parlava català (The Last Man Who Spoke Catalan). In 2014 he received the Godó Prize for Journalistic Reporting and Essay for Les lleis del castell. Notes sobre el poder (Laws of the Castle. Notes on Power). He has published another book of essays, Pla i Nietzsche, afinitats i coincidències (Pla and Nietzsche, Affinities and Coincidences).

In his career as a diplomat he has lived in Madrid, La Paz, Manila, New York, Kuala Lumpur, Brussels, and London.

He is a member of Associació d'Escriptors en Llengua Catalana (AELC – Association of Catalan Language Writers).