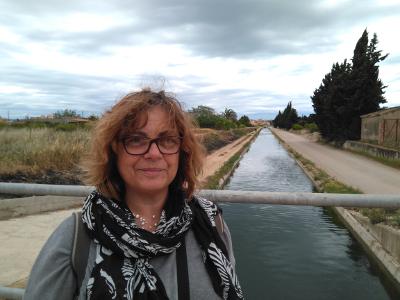 Pilar Garriga Anguera (Poble Nou, Barcelona, 1956) studied at Les Écoles Françaises and completed her secondary schooling at the Institut Montserrat. She has a diploma in Translation from the University School of Translators and Interpreters (EUTI) at the Autonomous University of Barcelona (UAB, Bellaterra), is a graduate of the Sant Cugat School of Teaching (UAB), and also has a degree in Catalan Philology from the University of Barcelona (UB).

She worked as a Catalan teacher at the Lluís Millet School in Santa Coloma de Gramenet and, subsequently, at the Antoni Brusi School in Barcelona. In recent years she has been employed as a secondary school teacher, also in Barcelona. She has been a member of the Rosa Sensat Seminar on Children’s and Young People’s Literature (1998 – 2008) and, from 1989 to 1999, worked with Concepció Zendrera, director of the children’s and young people’s section of the publisher Joventut.

She translates novels, especially children’s books and comic albums for young people and adults. She has worked for the publishers Joventut, Zendrera Zariquiey, Grijalbo Mondadori, Edicions 62, Edicions B, and Ediciones Serres. She is presently working with Norma Editorial.

She has published the novel Un estiu a Borneo (2003), the main character of which is based on her sister, a veterinary surgeon and primatologist working in the jungle of Borneo. Two other characters are the students Martí and Mont, and all three feature in her other novels L’home del bosc (2005), Un estiu a Tacugama (2008), and Un estiu al Priorat (2014).

She has taken part in Joan Barril’s radio programme El Cafè de la República, as well as being published in several jointly authored works of fiction and poetry. She gives lectures in reading clubs and for groups as well as talking about her books with adults and young people.

She is a member of the Associació d’Escriptors en Llengua Catalana (AELC – Association of Catalan Language Writers).