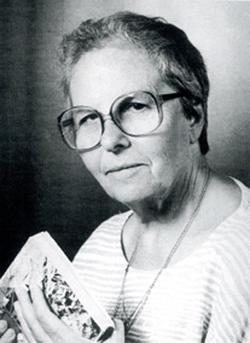 Teresa Juvé (Madrid, 1921) is a teacher and novelist. She studied at the Institución Libre de Enseñanza (Free Institute of Education) of Madrid and subsequently – now in Barcelona – at the Ausiàs March Institute of the Generalitat (Provincial Government of Catalonia). At the end of the Civil War, she went into exile in France, completed her studies in Philology and Comparative Literature and gave Spanish classes, while also writing her thesis on the poet Peyre Gudulí. During the years of the Second World War, she worked with the French resistance and was almost captured by German soldiers on two occasions. In 1948 she married the socialist politician Josep Pallach in France, after which they lived in Paris and worked in a pilot-project Middle School Institute. In 1970 they returned to Catalonia and both the author and her husband taught at the University of Girona.

In the literary terrain, she was a finalist in 1963 for the Nadal Prize with her first novel – written in Spanish – called La charca en la ciudad (The Pool in the City) in which she relates her experiences in a concentration camp for women. Her main contribution to Catalan letters is the series of detective novels featuring deputy-detective Plagumà and his colleague, judge Joanola. Other works, for example El portantveus s'ha equivocat (The Deputy Has Erred, 1997); La Commedia dell'Arte sota sospita (The Commedia dell'Arte under Suspicion, 2000); Els assassins eren més d'un (There Was More Than One Killer, 2002); and Juguesca mortal (Lethal Wager, 2002) are fruit of her specialist studies of sixteenth-century Catalonia in which these works are set.

She is a Member of Honour of the Associació d’Escriptors en Llengua Catalana (AELC – Association of Catalan Language Writers).