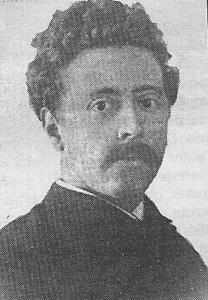 Josep Yxart (Tarragona, 1852-1895) was an eminent literary critic, fiction writer and poet besides his work as a translator, historian and journalist.

In his adolescence, at the end of the 1860s, and as a result of the influence of his writer cousin Narcís Oller, with whom he was closely united throughout his life, he began to write pieces on the manners and mores of the time and also poetry.

However, it was not until the early 1870s, when he moved to Barcelona to study Law, that his first articles appeared, in La Renaixensa, the publication of a circle of intellectuals with whom he enjoyed amicable relations. His first essay, Lo teatre català (Catalan Theatre) received a prize at the "Jocs Florals" literary competition in 1879, and made his name as one of the country's most promising critics. His readings of the works of Taine, Schiller and Zola gave sweeping ambition to his theoretical corpus.

In 1882, he was appointed as director of the review Artes y Letras, which was produced by the Barcelona-based publishing house of Daniel Cortezo and, in the subsequent years, he also became editor of the collection Biblioteca Clásica Española, through which he became friendly with Pérez Galdós, Azorín and other writers.

His essays on theatre are especially widely recognised and in 1886 he began to publish a series of five yearbooks entitled El año pasado (Last Year), in which he collected his reflections on cultural life in Barcelona. He also translated Schiller and towards the end of his life, now a prominent intellectual, he became president of the Jocs Florals literary competition and the Barcelona Ateneu (Athenaeum).

He died prematurely, aged 43 and at the height of his public recognition. In recent years, a considerable part of his work has been recovered, although there are still many unpublished texts in the Yxart Archive at Altafulla.