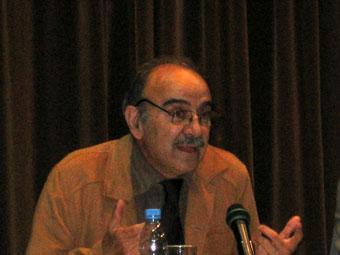 Joaquim Mallafrè (Reus, 1941) is a translator, teacher, writer and linguist. With a degree in Philosophy and Letters from the University of Barcelona, he is a lecturer at the Rovira i Virgili University of Tarragona. At an early age he began to give lectures, courses and seminars in a number of Catalan towns and cities and, eventually, in different parts of Europe, for example, Delphos, Prague, Salford and Trieste. He writes for specialist publications and in the written press.

His work as a translator amounts to a veritable legacy for Catalan literature, since he has translated James Joyce's Ulysses, along with the works of other writers including Samuel Beckett, Henry Fielding, Laurence Sterne and Thomas More (Utopia). Fruit of his work as a translator and teacher are the essays such as De bona llengua, de bon humor (Good Language, Good Humour - 1994), a collection of articles; and Llengua de tribu i llengua de polis (Language of the Tribe and Language of the Polis, 1999), an ambitious essay that goes beyond the realm of translation and into the domains of linguistic anthropology and sociology; and Uns i altres. Literatura i traducció (2016).

In 1998 he was awarded the Creu de Sant Jordi (St George Cross) for his work as an educator and translator and, from 1999 to 2002, he was vice-president of the Philological Section of the Institut d'Estudis Catalans (Institute of Catalan Studies). He is still engaged with his work of translating Anglo-Saxon authors and teaching at the university, while also participating in major cultural events related with literature, for example the Mercè Rodoreda Centenary Year (2008).