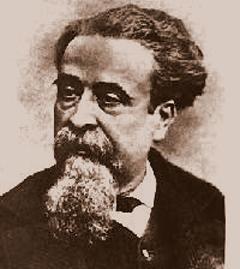 Frederic Soler (Barcelona, 1839 - 1895) was a playwright, poet and theatre impresario. He is an outstanding representative of Catalan romantic theatre and he successfully revived the popular style of theatre with satirical and humorous works such as L'esquella de la torratxa (The Small Bell in the Small Tower) (1864), El castell dels tres dragons (The Castle of the Three Dragons) (1865), amongst others which were performed in the La Gata society under the pseudonym of "Serafí Pitarra". Subsequently, and under his own name, he moved into drama, which was very well received in bourgeois society, in the form of works like Les joies de Roser (Roser's Jewels) (1866) or Batalla de reines (Battle of Queens) (1887), the latter being awarded an extraordinary prize by the Royal Academy of Spanish Language.

He founded the society Teatre Català (Catalan Theatre) at the Romea theatre for which he was the impresario. He also wrote poetry, both satirical and refined, and he was nominated Mestre en Gai Saber (Master in the Art of Poetry) in the Barcelona Literary Contest, the Jocs Florals.