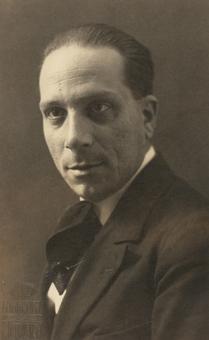 At the age of eighteen he qualified as a teacher and worked as a substitute in a school of Aielo de Malferit (La Vall d'Albaida). In 1916, after passing the public service examination the previous year, he was appointed as a teacher in Benassal in the Alt Maestrat region. He remained here until 1934 when he was transferred to Benimaclet where he was to reside until his death in 1955. He married Sofia Monferrer i Beltran and had two children, Carles and Sofia. In Benassal, Carles Salvador threw himself into a major project of defending the Catalan language and national rights, this including establishing the Associació Protectora de l'Ensenyança Valenciana (Association for the Protection of Valencian Language Teaching). He was to continue working as a nationalist activist throughout his life at the literary as well as political and cultural levels. Evidencing this constant activity are the positions he held as President of the Language and Literature Section of the Centre de Cultura Valenciana (Centre for Valencian Culture), as President of the Literature and Philology Section of Lo Rat-Penat cultural society, as a teacher in the Valencian Language Chair of the University of Valencia Language Institute, his work for the Institute of Catalan Studies, and as a member of the Sponsorship Commission for the publication of Alcover-Moll's Diccionari Català-Valencià-Balear (Catalan-Valencian-Balearic Dictionary).

He produced a vast corpus of literary and grammatical works. Noteworthy among his titles as a poet are Plàstic (1923), El bes als llavis (Kiss on the Lips, 1934) and El fang i l'esperit (Mud and Spirit), which was awarded the Provincial Government of Valencia Prize in 1951. His prose works include La dragomana dels Déus (Dragowoman of the Gods, 1920), Elogi del xiprer (In Praise of the Cypress, 1928), Elogi del camp (In Praise of the Land, 1930) and essays devoted to Benassal El Llibre de Rúbriques de Benassal (Benassal Book of Rubrics, 1951) and Les Festes de Benassal (The Festive Days in Benassal, 1952). Finally, as a grammarian and propagator of the language, he published works such as Ortografia Valenciana (Valencian Orthography, 1934), Morfologia Valenciana (Valencian Morphology, 1935) and la Gramàtica Valenciana (Valencian Grammar, 1951).