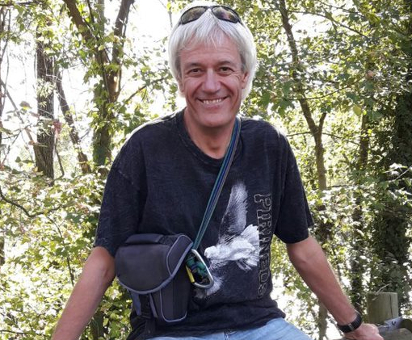 Manel Figuera i Abadal (Barcelona, 1957) is a primary school teacher, Catalan language teacher for adults and text corrector. He has been living in Cerdanya (Catalan Pyrenees) since 1982, currently at Vilallobent (Puigcerdà) village. and he taught at the Vedruna College in Puigcerdà from 1983 to 1990. In the latter year he began to work as a linguistic adviser in the Cerdanya Regional Council and, in 1992, he was offered a position with the Consortium for Linguistic Standardisation, where he still works, while from 1999 to 2007 he was a member of the Bellver de Cerdanya Council.

He was awarded his first prizes in 1989 and 1990, although his true literary vocation was awakened somewhat later. In 1993, with three other authors, he published a collection of poems. Since then, he has written poetry and novels although he has worked mainly in the genre of the short story, for which he has been awarded most prizes, notable amongst which are the 2004 and 2009 Roser de Plata Prize of the Town of Puigcerdà, the 2006 "Homilies d'Organyà" Pyrenees Prize and the Francesc Bru of Canals (Valencian region).

An indefatigable mountaineer and hiker, he is best known for his ramblers' guides, one of which, La Cerdanya, rutes i passejades (La Cerdanya, Routes and Walks), has gone into five editions. The region where he lives and the Principality of Andorra are the Pyrenean areas about which he has written most. He writes for publications such as Vèrtex, El Mundo de los Pirineos, Cadí-Pedraforca, El Picot Negre, Pànxing Pirineus or Belluga't. He has participated in the programmes "De Vacances" (On Holidays) and "Caçadors de Paraules" (Word Hunters) on TV3 Catalan Television, "Temps d'Aventura" (Adventure Time) on Channel C33, as well as in a number of reports on Andorra Television and he has also revised the Editorial Alpina maps of La Cerdanya and Andorra.