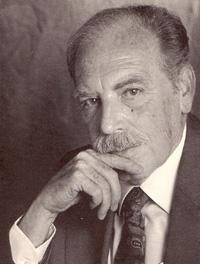 Gerard Vergés (1931–2014) was a pharmacist, poet, essayist, translator, columnist and teacher. The son and grandson of pharmacists, he graduated in Pharmacy from the University of Barcelona and obtained the title of Doctor in 1962. Since 2001 he has been a Permanent Member of the Royal Academy of Pharmacy of Catalonia. In 2003 the Generalitat (Government) of Catalonia recognised his professional career with the Josep Trueta Medal for Merit in the Field of Health and, in 2007, the Official College of Pharmacists of Tarragona presented him with its Gold Decoration.

With his honest, exceptional style, which is both original and classical, Gerard Vergés is one of the most representative, singular writers of contemporary Catalan poetry.

Winner of the Gold Medal of the City of Tortosa in 1986 and 2009, he was also awarded the Generalitat (Government) of Catalonia’s Creu de Sant Jordi (St. George Cross) in 1997.